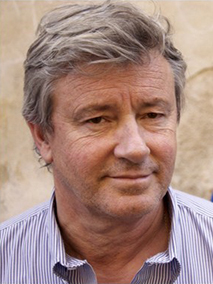 His works with all kinds of metal, recently with his son he built a bronze foundry.

In 2005 he also became a lithographer, having acquired two lithographic presses and serveral hundred stones. He and his wife work togther printing from the images drawn on the stones.

Sculpture is a physical appropriation of our environment, a quest for our world’s realities. The artist perceives each reality in a personal and sensitive way. To conceive and make a sculpture, to develop a project or an idea and put it into material is a way for the sculptor to understand his environment.

Modern sculpture has moved on from the traditions of the past. It has become an autonomous creation in which iconography, technique, material and proportion are infinitely variable.

To make an artwork that is genuine and dynamic means accepting the thought process that drives its creation. Even if sometimes the artist is uncertain about his direction or finds himself obligated to back-track, it is all part of the path that leads to the final creation. He accepts the unpredictability of the challenges he will have to face. Thought and creation are the very basis of art, without one or the other, there is no art.

There is no formula to making art. Inspiration is a crucial energy that is drawn simultaneously from within the artist and from his environment. Furthermore drawing and experimentation are principal means of conceiving a sculpture. However once the sculpture begins it is all about the reality of its materials, the space it occupies and the truth of its subject. Sculpture is free, like a spirit, it aspires to contain the complexity of life itself.

It is a material that enables the artist to work with paradoxes: solid/void, positive/negative, light/dark, soft/blunt, geometric/organic.

“When one works with metal, one shapes it and it defines its own space”

Working with metal enables the sculptor to create an immediate gesture, like a drawing on paper, it becomes evidence in space. It enables the artist to free himself from conventional constraints. It fulfills his desire for spontaneity and freedom. With experience, he acquires the grammar of the material and develops his artistic language. He learns how to see matter from inside, as if metal was more tender than it is…

The grammar of the material is technique. Indeed the sculptor must first know technique so thoroughly that the tool becomes an extension of him arm. It also becomes an integral part of the thought process, of the path that leads to the final creation.